Muc-Off is a responsible producer of lubricants, greases and cleaning products. In 2020, we launched Project Green, an ambitious, wide-ranging and ongoing initiative led by a bold commitment to eliminate more than 30 tonnes of plastic usage within three years – as of February 2021, that target has been hit and far exceeded, with a new even higher target set. 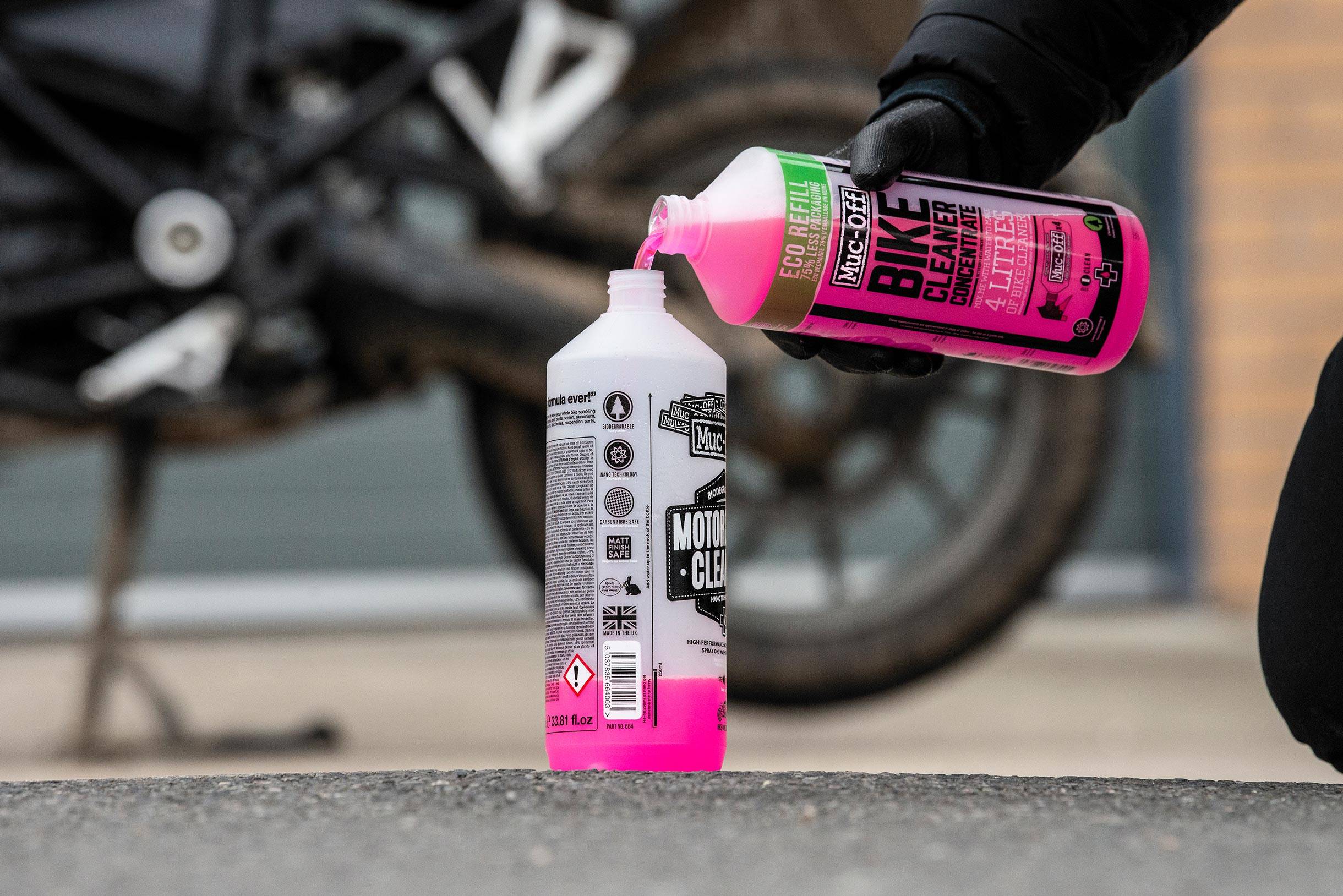 Further, Project Green contains commitments to expand our range of biodegradable products, increase recycling and refilling, and to establish new partnerships with organisations on the front line of environmental protection. Put simply, Muc-Off is serious about the threats to the natural world. In every area of our business, we have embraced the principles of sustainability and environmental responsibility.

Our joint research project with the Laboratory of the Government Chemist (LGC) and National Physical Laboratory (NPL) represents an interesting case in point. While the time constraints of a three-month collaboration confined us to the performance aspects of lubricant development, many of the learnings that emerged from the laboratories of LGC and NPL have advanced our understanding of biodegradable formulas and components. 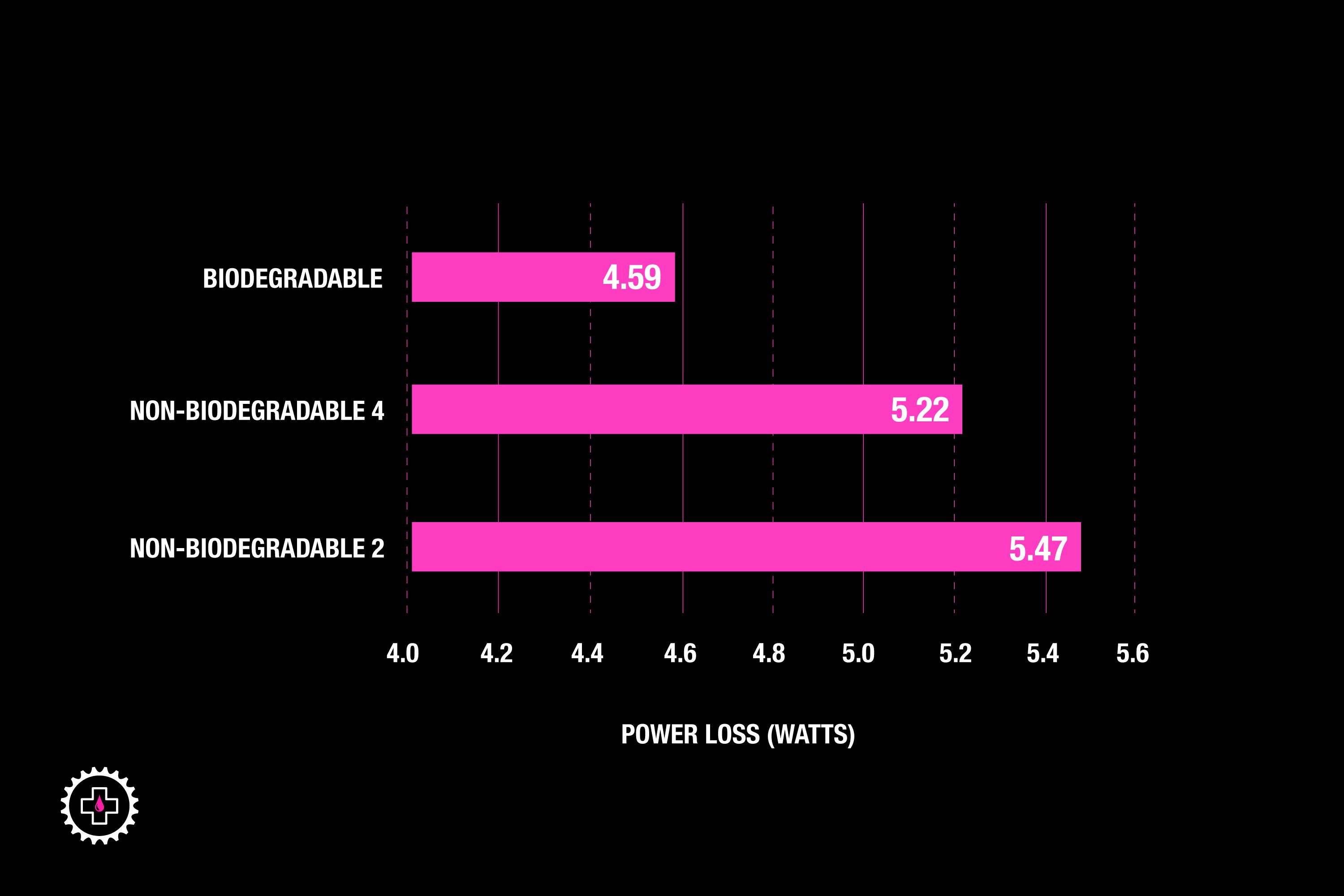 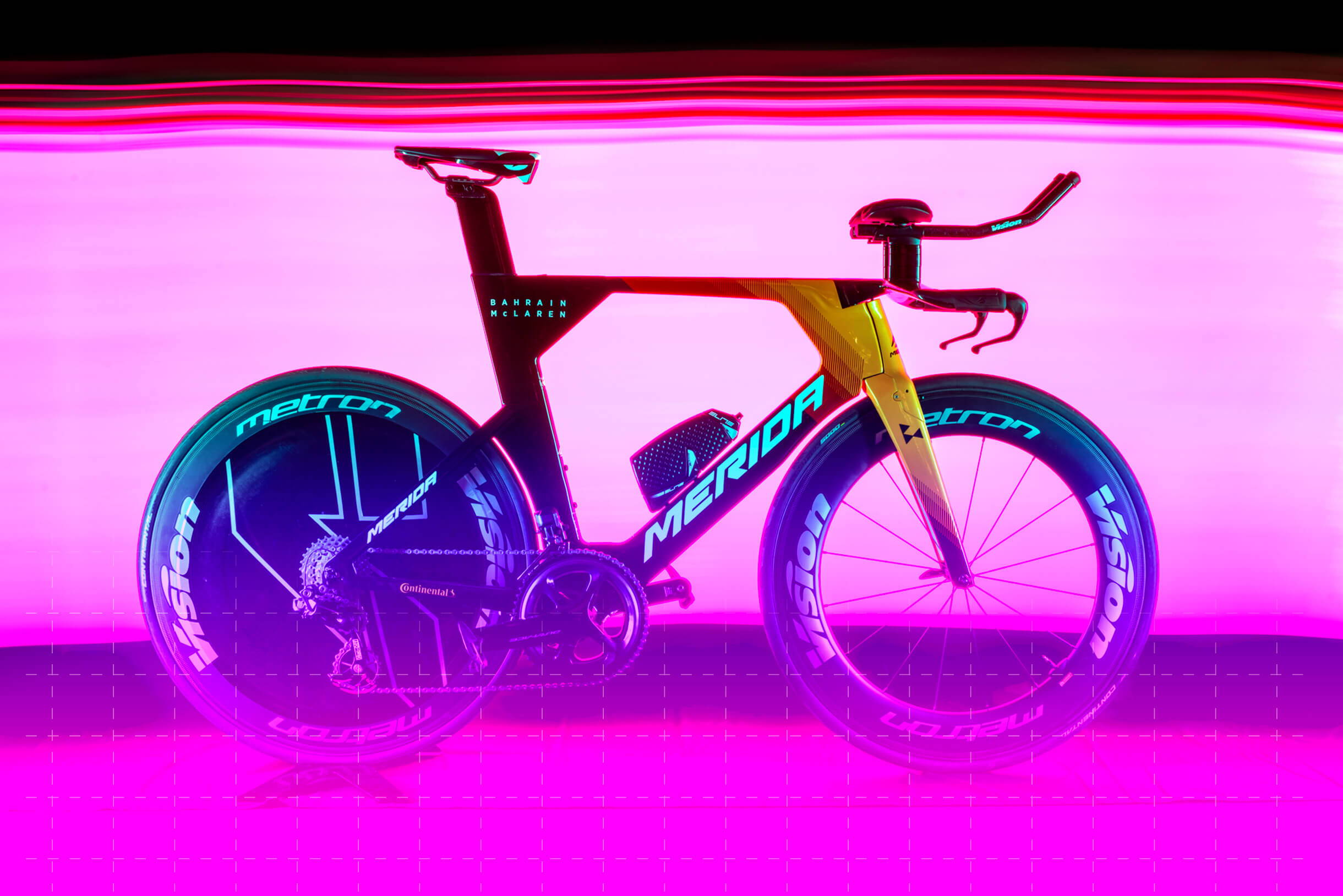 Full details of Project Landa, where we joined forces with Team Bahrain-McLaren to create the most efficient drivetrain imaginable for leader Mikel Landa to use in the pivotal time-trial stage at the 2020 Tour de France, can be found in Part Six. Here, we'll focus on the lubricant developed for the project and, specifically, on its green credentials. 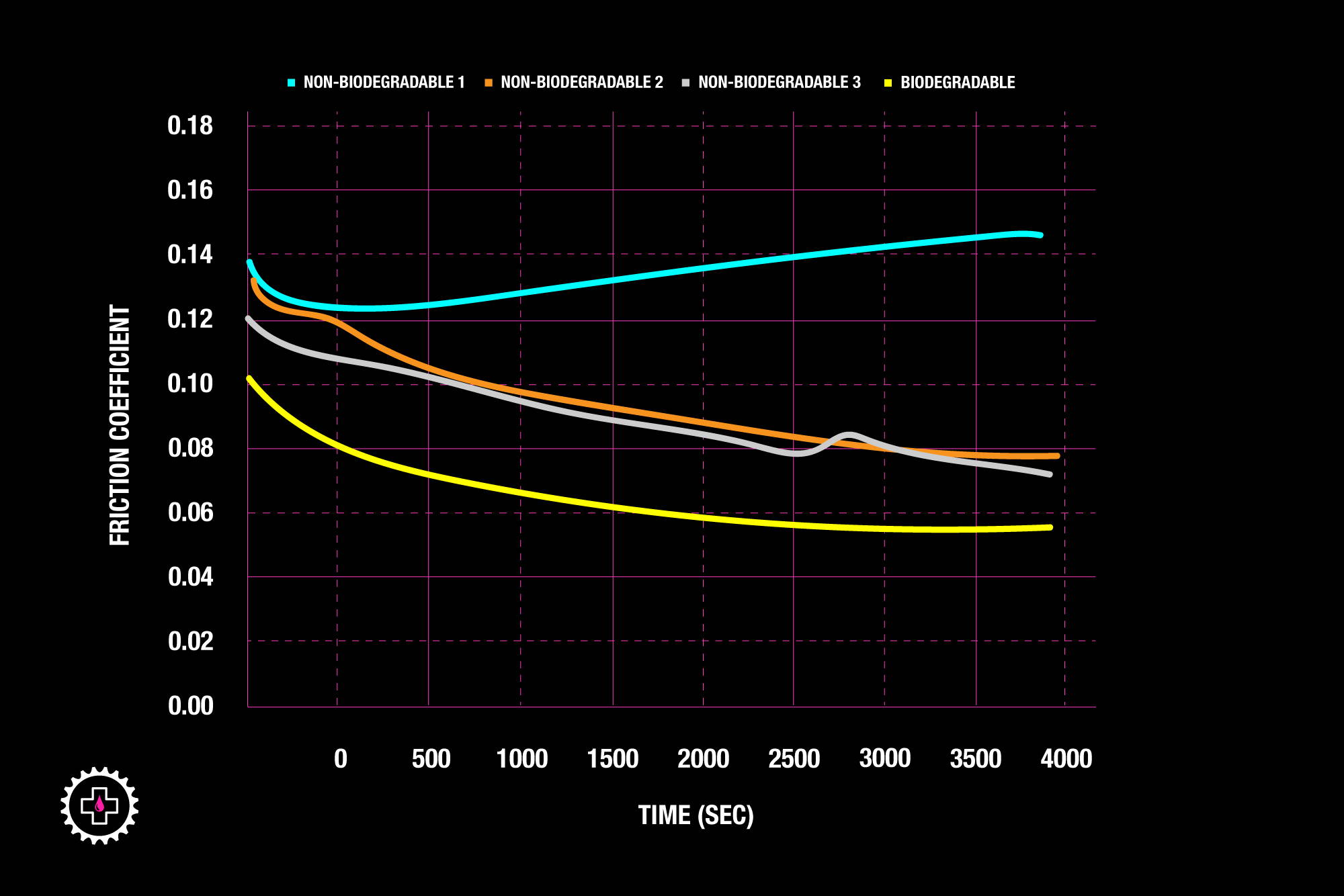 It's important to state from the outset that our sole priority for Project Landa was to create the most efficient lubricant possible (one with the lowest possible coefficient of friction) rather than to formulate a high-performance solution from biodegradable components. The coincidence of two such desirable outcomes strengthens the case for environmentally-friendly chain lubricant, rather than weakening it. The green solution was simply the fastest.

Two strategic considerations underpin the success of the Project Landa lubricant as a biodegradable formula. The first was to create the lubricant from scratch and to benchmark each individual component; a huge undertaking that led to more than 200 hours of screening, but which provided ultimate control over its chemical composition. The second was to follow a conventional formulation process, blending base oils and additives, rather than using nanoparticles. While motivated by time constraints (creating a formula in which the behaviour of certain nanoparticles is stabilised can be very time-consuming), it allowed us to consider a range of base oils and additives, including those classed as biodegradable, that formed part of the final formula.

The base oil used in the Project Landa lubricant is an ester, rather than a mineral oil or even a Group Five synthetic oil (polyalphaolefin), both comprised of hydrocarbon chains, whether by refinement or synthesis. While esters are also synthesised, the presence of oxygen in their branched structure, in addition to hydrogen and carbon, allows them to degrade by natural absorption of the oxygen molecules.

Esters offer the advantage of high viscosity too, allowing the Project Landa lubricant to reduce component wear, as well as to provide supreme efficiency thanks to its ultra-low-friction properties. Both qualities result from the absorption of oxygen molecules on the lubricant's surface. While oxidisation can compromise an ester's stability, typically this occurs only at very high temperatures, such as those inside a car engine, making it a remote contingency for a cycling time-trial held in September at a ski station in northern France.

The formula's success can be measured in large part by Landa's performance on stage 20. While the Basque rider is regarded as one of the world's best climbers, he is not considered a time-trial specialist. Even so, his performance against the clock, and notably on the brutal finishing ramp to La Planche des Belles Filles, was enough to move him up the final standings. He rolled into Paris the following day in fourth place overall to claim his joint highest finish in cycling's greatest race. 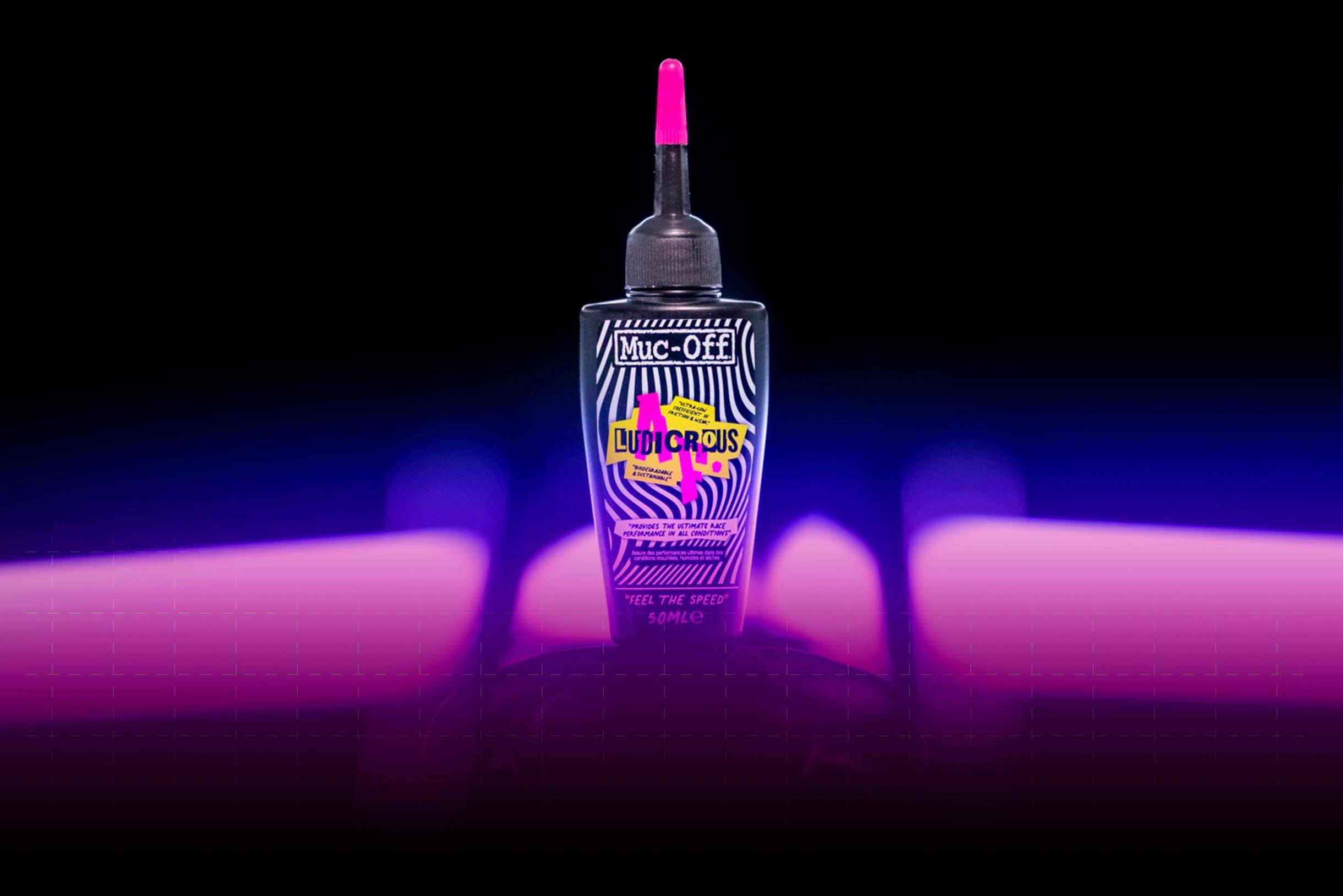 For Muc-Off's latest lubricant invention, being environmentally friendly was once again at the top of the list of requirements. Dubbed 'The World's Fastest Race Lube' Ludicrous AF takes drivetrain performance to a whole new level. It took our Research and Development Team over three years to create the one-of-a-kind lubricant that was developed in secret alongside pro-cycling powerhouses INEOS Grenadiers and EF Education-NIPPO. The lube was perfected throughout the 2020 Grand Tour season, with multiple podiums and an overall win at the Giro d’Italia 2020 and 2021 to cement it as the lube to beat for any brand.

While it is the fastest lube around, that is not all it offers. Crucially the formula is non-toxic, offering piece of mind for any rider using it. In wet conditions or when a bike is being cleaned, naturally, lube will be washed away – thanks to its readily biodegradable ingredients, this can happen with Ludicrous AF without impacting the environment. Ludicrous AF will also prolong the life of a rider's chain and even bring it back to life. The lubricant continues to improve with chain run-in due to continued surface improvement at a molecular level, so riders save on environmental wastage by using their existing chain again and again, whilst maintaining the same incredible level of performance.

With Project Green putting a serious focus on sustainability, ultra-green and ultra-low friction is now the new normal for Muc-Off's ground-breaking lubricants. 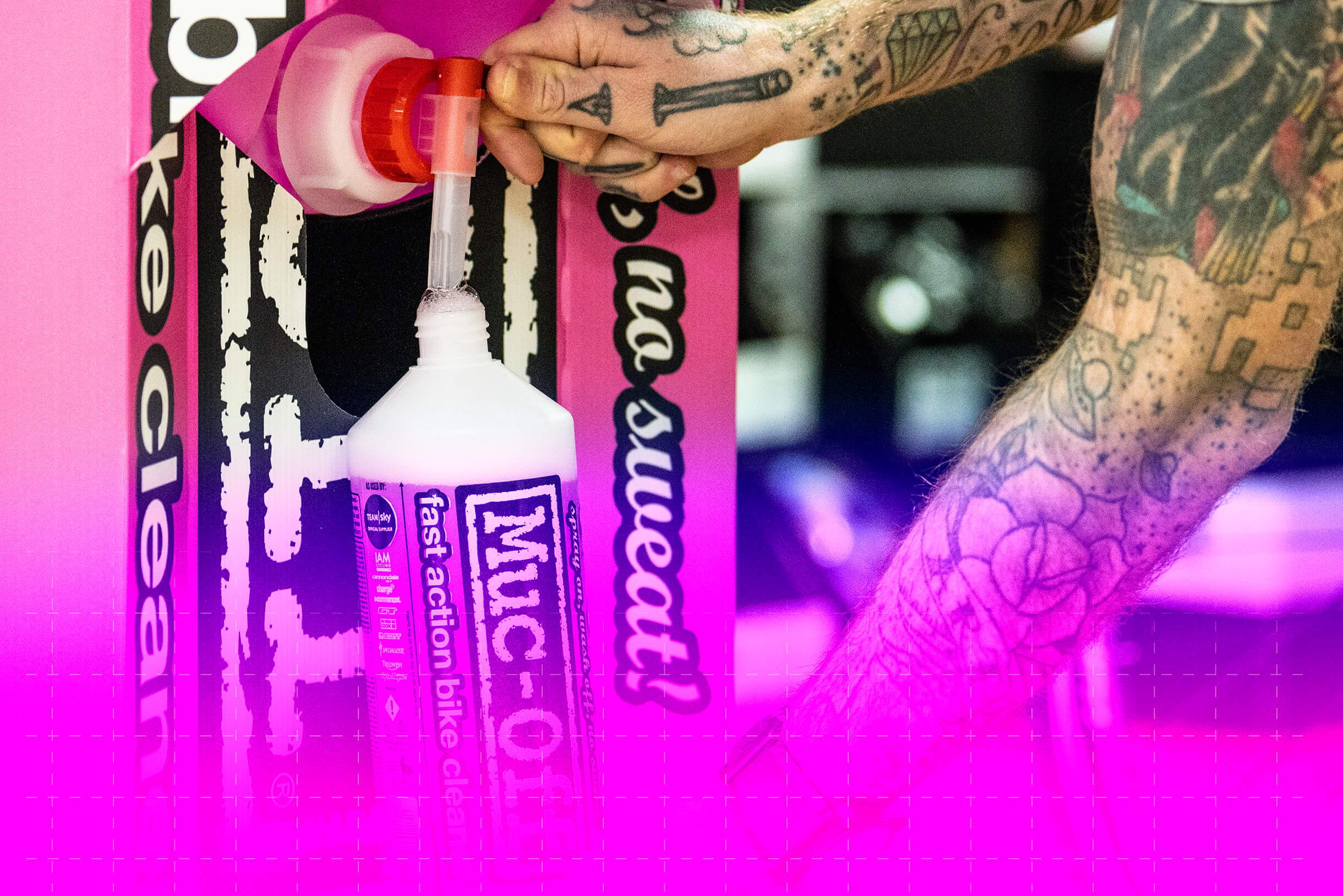 As the category’s leader, Muc-Off has sought to establish behaviours that our competitors will also adopt. Our entire range is PTFE-free, and each year our range of biodegradable cleaners, sprays, lubricants and greases expands. Our Nano Cleaner, Muc-Off's flagship and the product that established pink as our signature in 1994, led the way but has since been joined by offerings as diverse as our water-based Wet Lube and our Visor Lens & Goggle Cleaner. 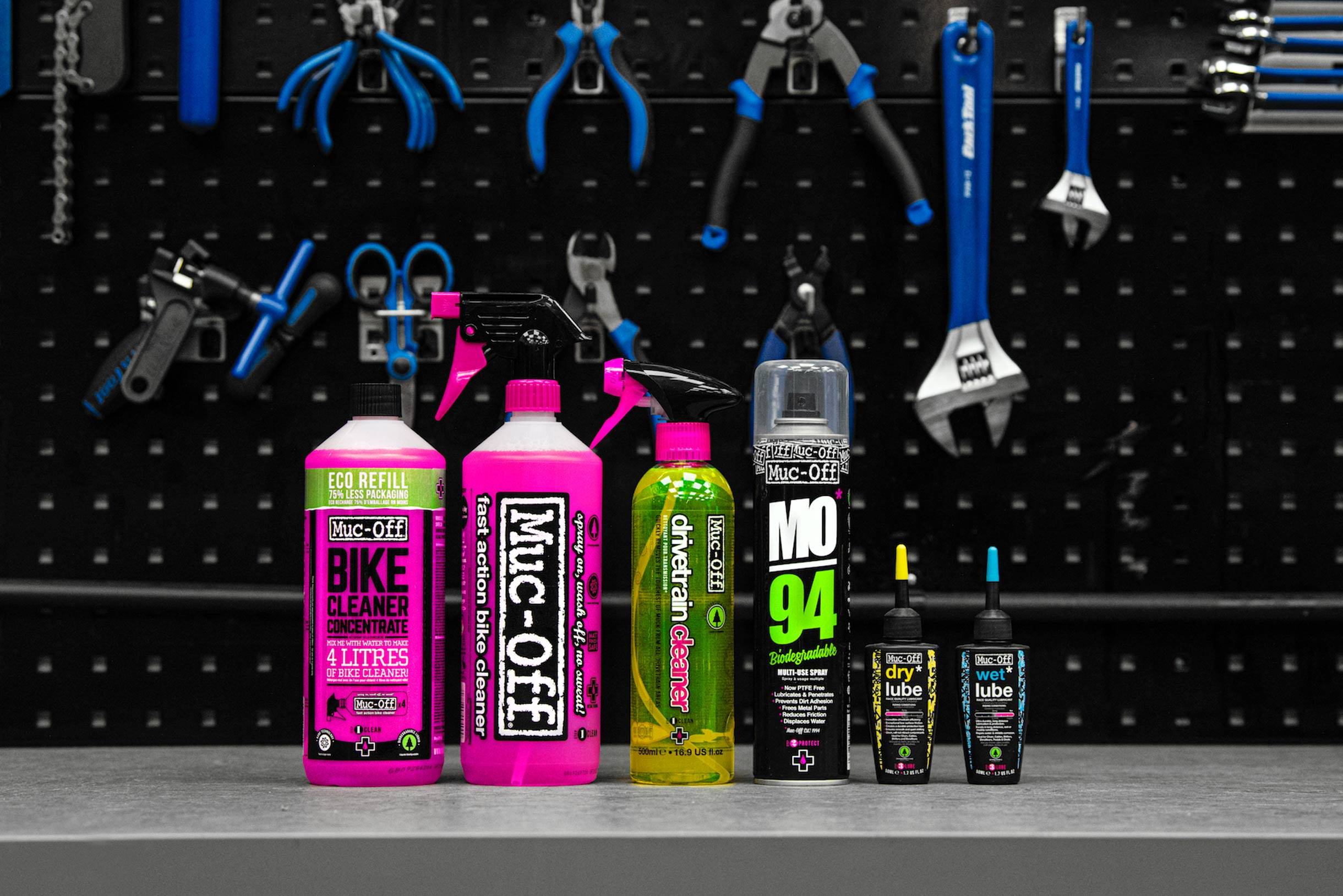 Project Green provides fresh impetus and greater clarity to our long-held belief that we are all responsible for the planet we share. Our Recycling & Refilling initiative empowers Muc-Off stockists and customers to show their support for environmentally friendly practices while saving money. And our partnership with the Trash Free Trails group has even involved Muc-Off's sponsored athletes, including Canyon//SRAM's Alice Barnes, the British road and time-trial champion, who swapped her Rapha skinsuit for a winter coat and Muc-Off Mechanic's Gloves to join our TrashMob.

It's worth noting, however, that while Muc-Off is obliged to seek certification to market a product as biodegradable, no other aspect of the process of manufacturing bicycle or motorcycle lubricants is regulated. This is in sharp distinction with the automotive industry, where a global drive for lower Co2 emissions has led to detailed regulation.

Earlier in this document, we noted the challenge presented to the bicycle industry of chemicals 'handed down' from parallel industries with greater economic presence, notably from the automotive industry. The scale of this challenge is magnified when considered through the lens of biodegradable components.

It is one we have mitigated by collaborating with suppliers on the development of bespoke components. The shortage of a biodegradable alternative to many commonly used additives remains a significant hurdle to overcome, however, for Muc-Off and its competitors.